The Back Story ~ Rosy

At sunrise that morning, Rosy could tell there was something odd in the air. It smelled faintly of sulfur. As she walked to the watering hole, all the other hippos were already out of the pens, enjoying the sunshine and quiet before the zoo opened.

As usual, the catcalls and bullying started as soon as Rosy came into view.

“Hey, Pinky,” added Calvin, “how do you know when you get sunburned?!”

Rosy went to the happy place in her head in order to ignore the heckling she endured since she was born as bright as a berry. It had taken her many years to escape the heckling, but at this age, she barely heard a word they said. 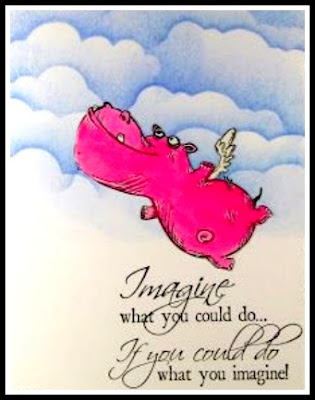 Instead she imagined herself with wings, bright yellow wings. They had to be yellow because yellow wings flew higher into the clouds than any other color.

As she neared the watering hole, the sky became black and the winds begin to shift and whip around her. The smell of sulfur became stronger. All the other hippos ran for the cover of their pens, but Rosy didn’t move.

She felt a pull on both shoulders and then all she felt was wonderfully light of heart, light of mind, and light of body. She knew her imagination was becoming reality. She smiled, waiting for lift-off.

Imagine what you coud do,...with your amazing imagination, with your words.
So inspirate Darnell
love your words in story
hugs Tamara

Oh yes Rosy really is my kind of girl, I know exactly where she is heading and I may have even bumped into her making my way to that destination. There's no better *Happy Place* than our very own creative spot! Keep on flying high Rosy your doing an amazing job..
So uplifting Darnell, it's like you've matrix'd into my mind today.
Creative Hugs Tracey xx

Darnell you really made me laugh this morning such a fantastic imagination you have, ever thought of writing a book? Such a fun card

I think you missed your calling, Darnell. You should have been an author. This is fabulous!

Amazing! Love the story and the card!

Haha, I love this month's story!! Rosy is too cute!! I love that she went to the happy place in her head to ignore the taunting ;) So creative and entertaining, Darnell!! Have a great day!! Big hugs :)

I think there is a little bit of Rosy in some of us. I love this card and the sentiment. Fabulous story. Love Rosy and her little yellow wings. [Bunny]

So inspiring in this bullying age. Rosy has it figured out and knows she can escape whenever she wants into the clouds. A sweet story and beautiful picture of Rosy by Cornelia. This would be a wonderful children's book Darnell.

As an author, I completely concur with Rosy! Beautifully written and illustrated, girls xoxo

You are a great story teller Darnell, and Cornelia's wonderful card with Rosy flying high in the clouds is beautifully done, and I love the sentiment too. x

So fun! What a great cooloboration

Loved Rosy's story. I agree, you should have been an author, but so glad you use your card making talents also. Love it.

You should compile all your stories into a book Darnell, they're very inspiring and you're such a good writer. Love that pink hippo with yellow wings. Looking forward to more little stories. Hugs, Gwendolyn

Love your story - and the pink hippo with wings is perfect. Waiting for more of the story.

You really need to start publishing these stories, girl. This one is both magical and includes a very important message. I love it! Anything can happen when there are fuschia, winged hippos in the world.

I'm not sure whose imagination is greater: Rosy's, Cornelia's or yours, Darnell. It's so fantastic to watch you two write and illustrate these wonderful pages.

what a wonderful story about Rosy :)

Well Darnell what an inspirational story, very topical in this day and age.
You have a fabulous imagination, and the image is wonderful, love the sentiment, Kate x

Hi Darnell, I love it.

Hope you are having a nice week. Sue

Too cute! my favorite line was... "how do you know when you get sunburned?!" You continue to amaze me friend : ) and bravo Cornelia on your delightful!! illustration : )

Wow, you have wrote such a beautiful story to this adorable image and saying Auntie! You and Cornelia work very well together! Love, love, love that sentiment! Hugs, Brenda

Love your card, Darnell! Glad it's not just me that comes up with a story based on the images, Jo x

Another lovely little uplifting story, thanks Darnell, you always bring a smile xx

Stick and stones Rosy, sticks and stones. A brilliant bit of storytelling Darnell and an exceptionally cute card too xx

You and Cornelia make a great team and I love the story of Rosy.

It made me laugh, it made me cry...such a sweet story, Darnell. You and Cornelia make a great team! I'll be sure to prepare myself for the smell of sulfur.

Love Rosy, the story, illustration and humor. Thanks Darnell and Cornelia!

Love Rosy and that she could take flight! What wonderful inspiration!

What a wonderful story--so timely and inspirational! You both never disappoint! Love every new story!!

Oh, that was beautiful, Darnell. Is there something wrong with me that this story brought me close to tears? At first it was because I was sad for Rosy, and at the end it was because I was happy for her. She's more special than anyone could have ever imagined. I hope she blew all their minds when she rose into the sky with her yellow wings, sniff sniff. Thank you.

Rosy's a strong woman. She'll definitely fly. And where she goes, bullies will be tried and convicted of their crimes. Wonderful card. Rosy is just too cute! Loved your back story.

Today the story is a bit wistful, but in the end happy.

Well done to you both - a fabulous card and a fascinating backstory, thanks Darnell
Blessings
Maxine

Absolutely delightful story, Darnell ... Rosy is such a great example of that phrase about sticks and stones ... she rises above everything on her delicate golden-yellow wings. Love that her imagination became reality ... I'm sure she and I would be firm friends! LYAMYLALMA! Big hugs and bisous, Anita :)

I love your imagination as much as Pinky's :) What a delightful card and story - I needed that :)

Oh that is so cute!! I love the little story you wrote about Pinky. Your imagination is wonderful. I think you should write a children's book!!

Irma I love your story.
The hummingbird and the succulent flower is amazing (like you). BBB

Oh so brilliantly pink and glorious! Such fun! Love your imagination, along with the card!

Great work on both counts!

Great short story that teaches a lesson, Dolly. Perfect collaberation between you and Cornelia! Always enjoy your stories, my friend! Love, Lolly

Jaipurantiageingclinic said...
This comment has been removed by a blog administrator.
May 27, 2019 at 4:08 AM