First, the challenge at this week's Less Is More, hosted by the delightful Chrissie and Mandie, is "Recipe."  They want us to incorporate the following into our recipe (fold gently, do not stir):
Three of something
Two of something
One of something
What a fun challenge!  Head's up if you play, it's not meant to be a game show, no no, it's a card show, so the answer sheet should be supplied with the card.
(Aside:  Which reminds me, the OLW favorite subject card answer was shorthand, and the shorthand in red above the short hand is the shorthand character for the word "shorthand."  Congrats to all of you who guessed correctly!  Send me your snail mail, and I'll send off my undying love and admiration!)
Refocus pocus, the second challenge is this week's Addicted to Stamps, which is to incorporate gold in your card. 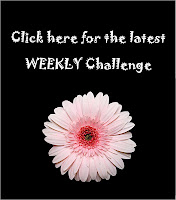 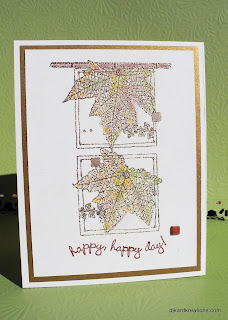 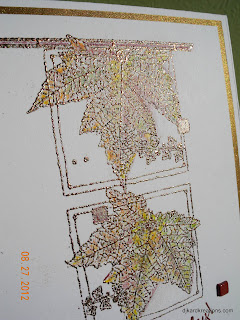 As usual, sadly, the photo fails to capture all the sheeny shine of the embossing.  The end of today's featured card.
~~~
Here are a couple of fun pictures I just downloaded of our spin around the lake on Sunday in a little rental motor boat.  Which died on us twice.  I was very impressed at how the big boys kept their language child-appropriate! 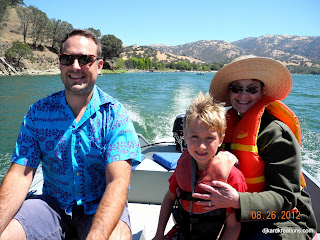 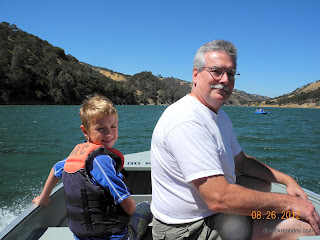 Adam and Papa
~~~
Mommy has been away a few days visiting her ill Auntie Sandra and Henry decided to make her a card.  I had shown him my blog earlier in the day, so he wanted me to take a picture of this card to post.  (Adam was out front helping Papa wash his dirty motorcycle and trailer.) 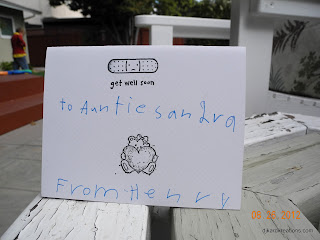 Henry was so proud when I photographed his card, but he wanted no part of standing next to it.  That's okay, I got him in the background, loading up his squirt gun to go around and ambush his brother!
~~~
Before I go, I would like to say my thoughts and prayers are with those affected by Isaac. My sister, Diana, is one of them.  I'm assuming her scheduled flight and meetings in Florida have been postponed.  Speaking of Diana, I have to show you this.  She had a birthday party for a friend and made the cutest cake for the honoree! 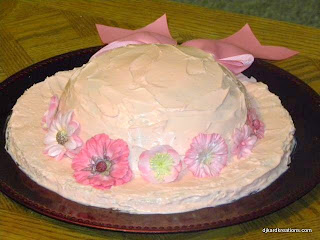 You might think it's too pretty to eat, but after a second of oohing and aahing, I just want to lick off that luscious frosting which looks like a huge scoop of soft serve ice cream on a plate!!  Diana would have to be okay with that because I've seen her pick up her plate after eating cake and ice cream and lick every last morself off.  Morself?  Well, you know what I mean.  Anyway, if a person eats too much of that sort of thing, they end up with morself.
Okay, I'm going.
Enjoy your day!  As always, thank you for stopping by to visit. Special thanks to you if you take the time to join as a follower or leave a comment!

Email ThisBlogThis!Share to TwitterShare to FacebookShare to Pinterest
Labels: Addicted to Stamps, Less Is More

Nom nom, now you've gone and shown me that lovely cake, I've forgotten about your card! The card is lovely, super shiny and lovely balance. Henry's card is a real cracker and I'm sure Auntie Sandra will really appreciate it. Looks like you had a great time on the lake - the photos are great anyway! Wish I could have a morself of it myself!
Oh, and the official bit, thanks very much for joining in the fun at ATS again :)

Love your post today Darnell, now can I remember everything you said - well I love both your card and Henry's too - that plaster (bandade?) looks so funny but it is so appropriate. Loving your Sister's cake, it is beautiful and there would definitely be morself of me if I had some of it.......like the photos too. Crafty hugs, Annie x

Great post and a super card Darnell, the embossing looks lush!
Thanks so much
Chrissie
"Less is More"

This is a beautiful card ~ LOVE your coloring on the leaves. What a fun cake. Henry's card is wonderful also!

You're a breath of fresh air Darnell. A yummy calorific cake and fab cards from yourself and Henry, love that leafy stamp. xx

Oh no now I've got the night time munchies!! What a lovely cake and I love your shiny card. Those leaves look wonderful. x

Thats a clear case of eating ones hat!! Gorgeous card. Love the leaf effect. Can you send the plans over for your garden house cos we are building a playhouse and chicken coup in the palyground and the dimensions are looking a bit weird to say the least! Hugs Mrs A.

Your card is great - and yes, I can still see the shimmer of the embossing.

The motor boat trip looks like it was a lot of fun, for all ages.

And the cake - yum! I hope your sister is safe.

Seriously Darnell, you're going to have to rein in (or should that be "reign".....lol) this wonderful thought process of yours as I am in need of having to cross my legs each time I visit! Your card is beautiful and well done for combining both challenges - I'm still pondering on the LIM one. Your family are one talented mob......Diana's cake is gorgeous and Henry's card is so sweet. Thank's so much for joining us at ATS this week.

oh what a gorgeous card, darnell!! love those beautifully embossed leaves... and the cake??? too yummy!

Gorgeous card Darnell - I love your embossing:) I must say that cake looks yummi too and its such a cute design, Hugs x x

Gorgeous card, Darnell! Love those leaves and the colors with the gold. Such fun with the fam! Onto the next card: Wonderful placement and choice of stamps, Henry! I love the use of blue and your handwriting is awesome!

Hi Darnell! Please tell Henry I think he did a great job on his card. Everyone loves a hand written note. Your card is gorgeous and I can imagine how beautiful it looks in person. Sorry things got messed up for your sister. Adorable cake!

Hi Darnell-Lovely card,the embossing really brings out the leaf texture doesn't it?
Cake-i love cake !now that looks like "my" kind of cake(tee hee !)and your boat trip looks like so much fun :)

Amazing, Darnell. The gold embossing is terrific and I love your layout. Thanks so much for playing along at ATS xx

I get dizzy and giidy and all things idy reading your posts , another whirlwind of fantastic art, gorgeous cakes, cute kids cards , lovely photos ( whose the looker driving the boat ) !!!! and so much fun apart from the sad news hope all are well ! Thank you for sharing this super gorgeous leafy creation in gold with us at Addicted to Stamps and the best of luck to you !

We definitely get value for money from your posts, Darnell! And low-calorie cake ;)

Great card, I love the little touches of colour on the leaves. Great card from Henry too!

Beautiful embossed leaves! You caught some of the goldiness in the light! Henry's card making is astounding and he's so sweet to want to make a card for his sick Auntie. The boat ride looks fun and the cake amazing and it looks delicious!

That cake is just so beautiful, almost too pretty to eat but I'll bet is was yummy. Your card is so adorable, love the colors and your heat embossing, so beautiful. Looks like you guys had a blast on your motor boat trip too, but where are you?

Your card is just FAB Darnell, as are the photos Looks like super fun was had by all!
Thanks very much
mandi
"Less is More"

Great card Darnell, love the shiny leaves.
Fab photos too, looks like you all had fun. xx