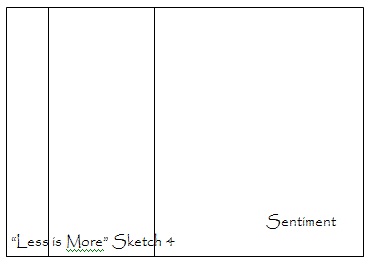 The rules are for the card to be:

When the posting was made, I decided to do a card with a lovely bee stamp I have on the band and "Happy Bee Day" as the sentiment.  (That was the draft card I mentioned in yesterday's WOYWW blog.)  Life got busy and by the time I got around to making the card, I checked the other entries and noticed that Claire had made and entered a really darling "bee" card.  Now everyone here, I suspect, understands that there is no monopoly on innovation, but one still doesn't want to appear to be copying once such a discovery is made.

Before I could decide on a different image, I was blind-sided by a flare-up of my Crohn's Disease in the form of a stricture which required hospitalization and lots and lots of loopy drugs, but fortunately, no surgery.  Laying there, I envisioned a card with band-aids crawling up the band, instead of bees, and an appropriate "Get Well" sentiment.  As soon as I got home from the hospital (I'm not kidding, this Card Thing is more addicting than Dilaudid!), I made such a card.  It ended up looking like I was still loopy, which I wasn't, but sometimes design ideas need to remain just that: design ideas.

So last night's ephiphany was this card.  Now I'm not sure if I'll be disqualified from the challenge because my "sentiment" is on the band and my hearts are on the sentiment line, but the rules didn't say you couldn't reverse that, just don't mess with the layout itself.  I think.  Anyway, I likee and I might mail it to myself.  Anyone ever done that?  Loopy, loopy! 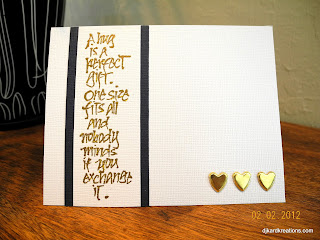 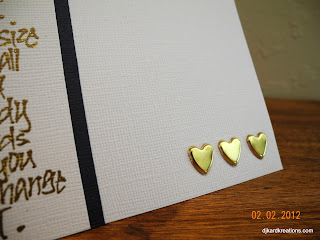 P.S. to all those great gals who sent me loving comments wishing me well, thank you so much!!!!  Most of you wondered what else I had in that big-fat-box-too-big-for-one-little-itty-bitty-C-plate, so first of all I should say that the camera did distort it somewhat.  (Why I have no idea, me not photographer.)  It wasn't as big as it looks, but you were right, inside were more goodies!  I treated myself to some of the new "all-in-one" doohinkies which are packaged about the same size as a C plate package.  That pile took up about a third of the length of the box and then Jo-Anne put in a bunch of air bags next to them, in case there was an accident with the Fed Ex truck.

(Any tips or linkies about using these new "all-in-ones" would be appreciated.  I don't even know the basics yet on the Cuttlebooger, but I figured as long as I was ordering and these things were 40% percent off and I had that free coupon for shipping ... .)

Thanks again so much for looking and to all of you who took the time to comment and join my site!

Email ThisBlogThis!Share to TwitterShare to FacebookShare to Pinterest
Labels: Encouragement, Less Is More

Your card looks perfect for our sketch... the fact that you have got words as your main focus is irrelevant, you have complied with the requests perfectly and your card is fab!
Thanks so much
Chrissie
"Less is More"

Superb card, love the fact you have the sentiment in the panel
Great take on the design
Perfect for us
Thank you so much
mandi
"Less is More"

What a lovely sentiment and a great card.
Angela

Hi Darnell, So glad you stopped by my blog! Thanks for leaving such a sweet comment. Pretty card it's a lovely interpretation of the sketch.

I love this card...gold is fabulous! Love the added hearts

Darnell, I so so admire you for your talent and imagination. I cant beleive it and hat little boy He is so adorable. Keep on going girl. Love you, Shirley