Felix wasn't paying much attention to his surroundings. He had just left through the back door of the paint factory where he worked. He hoped the boss hadn't seen him because he had been fired from every other company in Franklin Township due to his insatiable curiosity. The truth was, he was a living cartoon stereotype of a cat. And now he'd done it again.

As he slowed to a lope and stopped, Felix realized he was standing in the alley behind Miss Peterson's house. She taught piano lessons. “Great,” Felix thought, “all I need is for one of those kids to see that I spilled pink paint all over myself!” He knew they would taunt him mercilessly, just as they had done before with the mustard, and then the feathers, and all the rest.

Felix hurried further down the alley looking right and left for somewhere to hide. When he reached the dead end, he sat down, thoroughly dejected. Time slowly passed and Felix became aware that clouds had gathered.

Felix stood up on his back legs and raised his paws in the air, prayerfully thinking, “Oh, yes, please, please, sweet merciful rain!!” Even though he was deathly afraid of water, Felix jumped up and down and twirled around, hoping the universe would let loose. 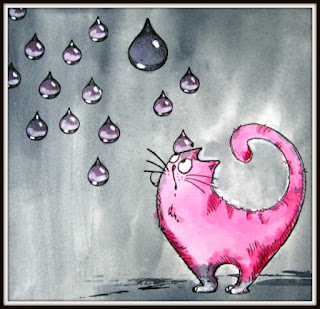 Finally dizzy, Felix spun to a halt and looked up to see huge raindrops begin to fall. "WHOA,” he thought to himself, gulping. “Steady on, ol' chap!"

Digging his claws into the uneven gravel, Felix whimpered as he realized the universe wasn't going to let him get away with this latest CATastrophe scot free. First, he was going to have to take some pain right smack in the face from the biggest raindrop he had ever seen!

Oh Darnell, I just absolutely loved reading your story that was fantastic so much fun, he sounds a real mischievous and curious cat, which a lot of cats are..I love this card with your pink cat and fab raindrops, well done and thanks for the story
Babs x

Wonderful story Darnell, I love Felix and his curiosity, love too that he's pink. I hope he doesn't get the sack. Fabulous image too,Kate x x

I hope for Felix that this big raindrop washes the colour from him. :-)
I like your kind of writing. You know how to turn words to amazing story. Cornelia's illustration is fabulous.
Have a nice weekend!
Hugs, Sonja

Cute story and love the card!
Have a great day!
Marilyn❤

Poor Felix...life can be so rough some days!! Hope the big fat raindrops do their job as painlessly as possible for his sake and that he gets to keep his job too! Of course, being as curious as he is, I'm sure this isn't his last CATastrosphie! FUN story Darnell and love the illustration too!! Hugs. :0)

Love it! You two have to put all these into a book! xoxo

What fun Felix is with his pink coat and love the huge raindrops, and as usual a fun story to go with Cornelia's fabulous artwork Darnell. I seriously think you should try writing a whole short story, and extend one of your tasty titbits into a full blown story. x

I was on Pond and needles waiting to get to the end. I really hope you two publish a book!!!

A smidgeon of what us women will do in our lives to get a might bit prettier or to cover something up. Poor Felix. I can't fault him for being curious. It's in his nature. And it can be quite fun.
[Bunny]

Felix is having such a hard time. We can tell he is so clutzy by the mustard and feathers and now the paint. His fur is taking a beating. I hope that huge raindrop will do the trick and he can get away without anyone knowing he spilled the paint. Great story and fun picture from Cornelia.

The card has become super great and I am always amazed, what a great story you can think of !!
Gundi

This might be my new favorite, girls - after all, there's a cat!! Felix will welcome the deluge - I kinda like him pink! and a few mustard-colored feathers would be nice!
=]

Great build up to the punch line on this one, love it xx

A perfect early morning chuckle - starting my day off well! Felix might want to visit Vancouver today as it's pouring with rain. Fabulous card and a great story.

Poor Felix...hoping that big raindrop will wash all that pink out of his fur. Or do I? He makes such a pretty pink cat. However, I fully understand his dilemma. It's a huge decision for a feline.
Just another entry in the "you-ought-to-write-a-book" saga. You an Cornelia could pay for all of you craft supplies with the royalties.

Poor Felix...he can't help being curious...it's what cats do! Hope he survives the raindrop!!!!
xx

You two ladies make a great team. I love this story and this scene, too cute. Poor Felix, I'm thinking he is looking pretty dapper in his pink coat! Hugs, Brenda

imagination what a fabulous gift you have.

OH! Darnell, your stories are perfect joy, this is another, poor Felix, he should know that his pink coat is wonderful and I hope he wasn't hurt too much with that huge deluge. Absolutely LOVE LOVE LOVE this card. (and story)
Faith x

What a wonderful story line and it fits the illustration by Cornelia perfectly. And, cats are always so curious so it really fit what they are like in real life. I always look forward to seeing the Darnell/Cornelia collaboration each time! They bring me much joy!

So enjoyed reading about Felix's latest "CATastrophe". So cute. You are a marvelous author. TFS

Oh do please tell us he didn’t get fired from his job just before Christmas!! Fabulous news report on his latest escapade . You don’t half know how to tell em. Hugs Mrs A.

Super story and just love the card, great expression on the cats face.

Adorable! I think Felix should just embrace the pinkness...it looks good on him!

While I do love him sporting his fancy pink do, I sure would love to have seen him all feathered up!

I love this!! Thanks for the smile I desperately needed today.

Felix looks so great in pink. I really wish he wouldn't let the rain wash it away. I think I'd like to have a pink cat. What a conversation starter it would be! Thanks for the entertaining story and awesome depiction of Felix and the raindrops.

What a fun post, Darnell! You are a wonderful writer! Cornelia/s kitty card is adorable!

I love your stories! You have a terrific imagination! Thank you for sharing!

My chuckle for the day. Love it!

Love your writing - and the illustration is great - with the PINK cat. what fun.

It's so fun to read your story and look at Cornelia's card. His expression and that big raindrop... it's perfect!

I do hope you two will bundle these beautiful stories and illustrations; they make such a great "tea-break-moment" between working... Love this story again Darnell!

great story and so cute Felix!

Another fabulous story and a super cute card. I love the pink cat, he is so fat and fluffy and really has the expression on his face that he is awaiting the "plonk" of the large raindrop on his head.
Keep these stories coming Darnell, they are superb.
Hugs, Neet x

Felix might be unsure of his new look, Darnell, but I think it suits him right down to his purple-ing paws ... and if he hears any teasing, he should just toss his raindropped head boldly in the air and stride off confidently! Hope he doesn't lose that job! LYAMYLALMCA! Big hugs and bisous, Anita :)

Even during times that I'm not keeping up with comments your stories are always favorites that I don't want to miss! Just seeing Felix in his pretty pink makes me smile. How fortunate he was to encounter a rain storm. Hope he didn't endure much pain from the problem saving giant raindrop!!

Yes, it's a great truth, we will always bear the consequences of our actions. Sometimes it is a bomb with a delayed ignition, sometimes we get on the head right away ... Great story and how beautiful the illustration. I love how Cornelia has added color to a raindrop
hugs,
BozenA