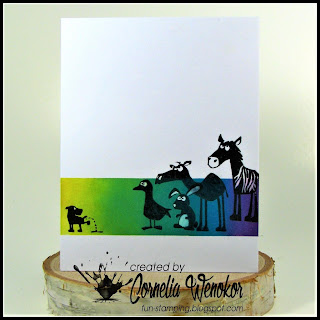 Arlene looked out her office window just in time to see young Chester lift his leg and whiz on the asphalt.

This was Arlene's 35th year at the Sacred Heart Animal Obedience School. She didn't even want to think how many classes she had taught and she was excited that today was her last day.

At the beginning of each class Arlene hoped she'd not have a "Chester" in her class. But.every.single.time.there.was.one. The other animals were eager to learn and willing to follow the rules. They were predictable and easy.

As Arlene continued to watch out the window, she noticed something she'd never noticed before. In fact, she felt a bit light-headed and silly that she hadn't seen it before. Then again, with a "Chester" in every class, naturally her attention was focused on him or her and the rest of the group became a bit of a blur.

This time Arlene stopped watching the little hooligan and focused her attention on the faces of the other animals. She was surprised to notice that they weren't shocked or disgusted in the least. Rather, they were looking at Chester with admiration and a bit of awe. Arlene knew from experience that even the donkey with his wonky-donkey eyes was feeling the same way. She leaned back against her desk and crossed her arms over her ample chest. She reflected on what her career would have been like if she hadn't had a "Chester" in every class. It didn't take her long to realize the answer: boring!

In truth, Arlene thought, the world needs Chesters. She remembered her father always quoting Henry Thoreau. She reached for her phone and looked it up.

"If a man does not keep pace with his companions, perhaps it is because he hears a different drummer. Let him step to the music which he hears, however measured or far away."

Arlene smiled, realizing that the same was true of the animal kingdom. She grabbed her purse and walked out of her classroom. On the way to her car, she stopped in the playground and stood in front of Chester. “Goodbye, Chester,” she said. Taking off her training apron, she patted him on the head, and then she emptied the entire pocket of treats on the ground in front of him. Throwing back her head and laughing out loud, she turned and walked away.

Note to Bette: I don't have your email address, so I hope you see this. Chester's card was made by Cornelia. The stamps used for Chester are from Cats on Appletrees. In the future, if you ever have any questions about the card illustrations on The Back Stories you can always click on Cornelia's name at the bottom of the story and that will take you to her blog for details about her card. Thank you for asking!
at 12:05 AM

What a treat for the first day of the month! I really love your little stories- we all need Chesters in our lives...it would be awful if we were all the same! So glad he got all the treats! Having worked a lot with children I always had a secret soft spot for the 'naughty' one!
Love the card too, the animal silhouettes are brilliant!
xx

Awww, what a darling story. I love the idea that the occasionally naughty ones can spice things up!

I bet you got out your phone and Googled that too, Darnell. I love the idea of accepting people, or animals, for who they are.

We've all had a Chester in our life and still do. How fun. Loved the story and the illustration.
[Bunny]`

Another great story Darnell and card just loving the animal silhouettes too, enjoy your day xx

OK, you made me look at Daisy in a new light and brought a smile to my face this morning! Thanks Darnell and have a great weekend!! Hugs. :0)

Seriously, when are you two going to put these wonderful stories and illustrations together in a book?

A post that brought a smile and get's me thinking to 'see' things different sometimes! Beautiful work from both of you again! Hugs, Gerrina

Thanks so much to you and Cornelia for these wonderful illustrations and stories. This one is fantastic and I love the lesson you portrayed in the story you wrote for the artwork.

Super story to go with a super image, love the both, Kate x

Bwahhahahahaha! Ain't it the truth. Can't fit everyone into the same box...life would be boring. Plus, who would we have to talk about. Seriously, a story with a REAL message to it.

You are so clever! Jo x

Too funny. Thank you and Cornelia too. B.T.W. my new foster dog does that too! LOL

As someone who teaches dog obedience, I loved your story, Darnell! I almost always have a Chester in each session! Though sometimes, it is the owner who is the problem, not the dog. Love the card that goes with the story - the animals are all so cute.

Fantastic story, intact in a way you could be a Chester and so could my youngest Grandson, not because he is naughty but does things others wouldn't think of doing in his class. Last year he found out that his teacher liked fudge so every Friday he insisted of taking her some fudge, He signed her Christmas card as
From the one and only, Austin Brining. Things like that just come into his head and he has to make it happen.
Great card too.
Kath x

Bwahahahaha!! Love the story AND the illustration! Guess there's a little whizz in all of us :)

What a great story to go with Cornelia's wonderful silhouettes, where does she find them...lol, and it is true that life has to have it's Chesters. x

What a funny graphic and story line! Love it ladies!

I think I gave birth to four Chesters. They certainly marched to some drummer I could not hear. Luckily, they all eventually turned into kind, compassionate hard-working adults who make me proud. Your story is a lovely reminder that even diversity in personalities is a good thing. I also love the inking on your card and the animal illustration. Very cool.

Hmmm - I had one 'Chester', but my daughter, who was my more compliant child, has two 'Chesters'.... Love your story Darnell, and you have verbally illustrated Cornelia's card brilliantly!
Blessings
Maxine

Darnell, this story is beautiful and has such great wisdom ... I sometimes stand out from the group and have a deep respect what others think of me so sometimes I am such a Chester :-) And I think that the world is more interesting because we are in the world . Your story is so clever and you just realized it to me :-) Thank you
I do not pee on the street, it was clear :-))
Hugs,
BożenA

I do look forward to your stories each month, and this one didn't disappoint. Fabulous as always my friend. Enjoy the weekend xx

What a great story and one I desperately needed to hear today. Thank you so much.

Oh, of course there are Chesters in the dog world too! I adore your sweet story so much. We hav etaken our last three dogs to classes and are always fascinated with the different personalities. The only sad thing is when some owners throw away their dog if they don't accept that every one is an individual and is worth their effort!

I like the Chesters of the world, as long as they're naughty in a nice kind of way.

We all need "Chesters" in our life. Great story Dolly ... and fabulous illustrations from Cornelia! xx

Oh I LOVE this story!! We need Chester's in our life to keep it FUN!!!

Would you let me know where those stamps come from again. I know you did that card and I visited the site but I've forgotten. Those animals a ding dong dang cute! Thanks, Bette

Such a sweet story. We have to live to our our beat xoxo