The Back Story ~ George

Everyone was gathering in the conference room to celebrate the boss’s birthday so George and Winnie walked down the hall together from the lab where they were assigned. 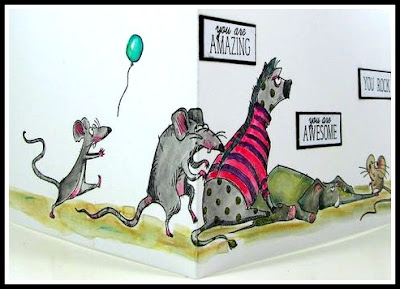 George was busy looking over his shoulder at 3-year-old Winnie who had just let go of the party balloon, so he didn’t notice the pileup in front of him until after he turned the corner.

Before he could stop himself, George stepped on Imogene’s tail which made Imogene howl and fall into the wall.

This allowed George a clear look ahead where he saw that Everett was lying flat out, his terrified eyes pinned on the tiniest mouse George had ever seen. Not even in the secret high-security lab.

George knew that Everett was frozen in fear and the only way to clear the hall would require him to step into Everett’s line of sight.

I just LOVE this story, it might even be my favourite so far. Cornelia's illustration is wonderful! I know I keep saying it but I really do hope that you do a book of these wonderful stories and illustrations, they are brilliant! Hugs, Anne xx

Oh come on now you can’t leave us in suspense. What happens next before I run out of dry nickers.!! Hugs Mrs A.

Lol I just love your stories and this is a cracker and your card is just fabulous l love those images and l can visualise what’s coming next but do put Mrs A out of suspense before there is an accident..lol enjoy your weekend xx

You are amazing! You are awesome! You ROCK! I can't wait to hear how this all turns out. ;0)

Great story for this lovely illustration!

Eek! Too much fun and great illustration!

You guys ROCK!!!!! The stories and illustrations are amazing, imaginative and fun, thank you, Darnell and Cornelia, for this fabulous weekly gift.
XO
Maria.

Love your creativity and Cornelia's art! Enjoy your day!

So funny, you and Cornelia are the perfect combo. It'll be children's books next :)

You two work so well together. The scene fits the story line perfectly.

Good grief...I so look forward to my Saturdays now, knowing I'll be regaled by enthralling stories from the mind of Darnell and the fingers of Cornelia. Great way to start the day. Thank you both.

Lol, brillant, you have missed out on a great career.

So would that tiny little mouse be a "Mini-mouse"? Which in later years was probably misappropriated by Walt Disney himself, hiding his petty theft with a spelling variation: Minnie Mouse!!

Love the story and the illustration. You and Cornelia are both so creative.

😂😂😂😂 ... to be continued I hope!? As I’m wiping my eyes and nose with Kleenex. I agree the best one yet story-wise and illustration/coloring. You guys are knocking me out the park!

A great story to match Cornelia's wonderful illustration. You have such a wonderful imagination Darnell, and the scene is beautifully put together and coloured by Cornelia. x

Oh my, Dolly...you and Cornelia make an awesome team:-) Keep the fun, cute and creative stories coming, my friend. Hugs....

Oh, hahahahaha! These characters and your story are a hoot! Tell it, girl! Cornelia sure has some great stamps and, like Nancy said, the two of you make an awesome team!

You are an amazing pair!! This might be my favorite too! Is there going to be a follow-up to this exciting tale?Enjoying your creativity is a wonderful way to start the day.

And to think that one tiny mouse could cause such havoc! The depth and angles in this illustration are amazing!!!

Brilliant fun card and story, as i always decorate the back of my cards to match the front I love how you carried on around the back of the card. Emmax

You've got us on the edge of our seats...then what happened!!

OK,OK, OK, now wot???? you can't leave us in suspenders like this Darnell!! love the card and the story thus far :-)
Blessings
Maxine

Oh WOW! You do make me giggle. What a great story and what a fabulous card to go with it .... perfect! xx

Brilliant! Story and illustration. Can't wait to read what next happens. :-)
Hugs, Sonja

So cute. You two should make a book with these collabs xoxo

Love how you leave us with a cliff hanger, Darnell ... brilliant story to go with Cornelia's fun illustration! LYAMYMA! Big hugs and bisous, Anita :)

Ha, I am just commenting on your cards as you are on mine, how great is that? I love this story but what happens next I wonder? xx

A little highlicht in my day (next to the sunshine) !! TFS both of you! You should get them in a book.... Hugs, Gerrina

Cuteness abounds, and your stories are amazing!