I think I have a scoring guide for sale.  I may have waited too long to pursue the activity of scoring, well, anything other than a straight line.   No, that's not true.  I can score.  I just can't seem to both score AND stamp on the same card, which would be the desired goal.

I'm going to show you my attempts at both scoring and stamping on the same card, just because you've all had days like this.

It started out simply enough.  This week's One Layer Wednesday challenge is being hosted by the terrific Karen Dunbrook.  Karen's challenge idea is for us to add scoring to our cards. 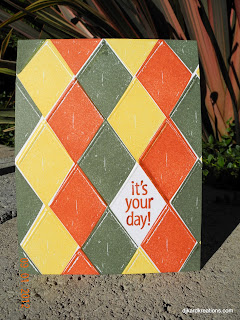 Ugh.  You can't even see the score lines anymore after the stamping.  Perhaps one should stamp first, score second.  I took a picture of the inside front of the card so you can see I really did score it laboriously into an argyle pattern.﻿ 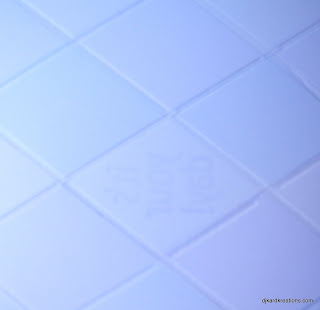 Oh, never mind, I said.  Instead, I'll laboriously score another card, switch to a square stamp, and this time I'll stamp lighter brighter colors in only one or two argyle squares, along with a sentiment. 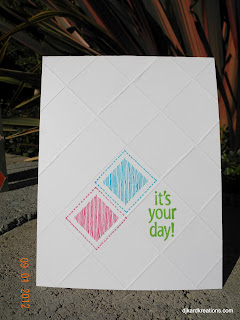 I remembered too late that even if you use a Stamp-a-ma-jig, it makes a difference if you don't hold your square stamp in the same way the second time.  Heavy sigh.  I mean, you would think if it was square, it wouldn't make any difference, but apparently this one does.  Did.

Oh, never mind, I said.  Instead, I'll just stamp one square, screw the argyle, add a sentiment, score boxes around them, and be done with it.  Sort of successful, definitely boring. 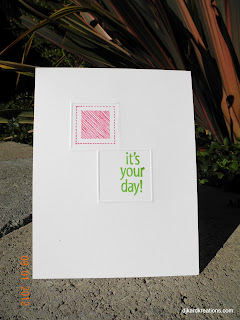 I'll link up anyway just because I do love OLW and the OLW hostesses and I want to be a good sport.  I hope you will play in the challenge and that you have better luck.  I need to see all the inspiration cards using scoring that you can put on there!

As you know, I love words and how the same word has different meanings, and I love the history and orgin of words.  Take the word "argyle," for instance.  This is what I think happened:

When the Scoti from Northern Ireland invaded Scotland, centuries ago, it was known as Pict-land. They promptly renamed it Scotland and brought with them Christianity, writing, and new technologies.  One of the new technologies was the production of thread from sheep's wool.  Out past Hadrian's Wall, there was a small farm run by Ida and Oswald MacAlpin. One evening, as the sun was going down, Oswald was attending to his constitution and Ida was setting aside her knitting for the evening.  As she looked up, she noticed a striking pattern had formed on the eastern wall caused by the shafts of sunlight streaming through the loom.

"Oswald," she called, "You must come see this!  I think I might try this pattern for your next pair of wooly stockings!"

"Umphf," answered Oswald, having just taken a swig of haggis and lavender mouthwash.

Undeterred by his apparent disinterest, Ida went on, "Oswald!  Can you hear me?  What do you think I should call this pattern?"

Oswald, having thrown back his head to gargle, couldn't hear a word she was saying.

"Aye," yelled Ida.  "You're right, of course, dearest!  Argyle is the perfect name!"

It's with much appreciation and delight that I welcome two new followers to the party!  Please help me give a warm welcome to Jenni of Jenni's Jems and Shirley Pumpkin of Look At My Cute Stuff!  How fun!
Enjoy!   As always, thank you for stopping by to visit.   Special thanks to you if you take the time to join as a follower or leave a comment!

Email ThisBlogThis!Share to TwitterShare to FacebookShare to Pinterest
Labels: One Layer Wednesday

OMG Aye Argyle too too funny! Yep we've all had those days. You get major points for sticking to it though. I have stamps like that. I put a tick mark on one side so I'll know which end is up when I use it.
Hugs
Bernie

Yes, indeed, we have those days! I have to tell you, though, that I really like the first argyle card. It has a rough, ruddy look to it that works well with the colors and gives it texture.

I think you did a great job....thanks so much for playing along.

Oh, you worked so hard for those cards. I can't line up stamps to save my life. I love your argyle story. Made me smile. :) ann

You're just so well-informed on so many subjects, Darnell. Not only are we treated to gorgeous cards (I love that clean and colourful argyle card), we're being educated at the same time. Talk about good value.

I did love your Argyle story Darnell. We spent our summer holiday last year at Hadrian's Wall but did not see any of those shafts of light......your card is exactly what was called for in the challenge and is lovely - keep practicing the stamping/scoring, it will come right......... eventually.....Crafty hugs, Anne x

You nutter! I love your first card- think you are way to hard on yourself. I can see the scoring and the stamping, so there!

SO THAT's where argyle got it's name! Hah! Too funny :) I really like the first card with the stamped pattern. It has a bit of a distressed look, and I think it turned out great!

Arnt stamp-a-ma-jigs tricky little things. I am still getting the hang of mine and still curse it lots... Love the arggghh story.. Sandy :)

I have so been there!! I can see the scoring on your first card - and I love the colours. I like the others, too, lots of white space and fun colours! Great OLW cards!

PS - I wonder if you scored the other way (so it's bumpy on the back) and then stamped, the ink wouldn't go into the wells, and you'd end up with white outlines around your stamped diamonds? And thanks for the history lesson. My Scottish husband will be surprised at how much I know about his homeland! lol!

Well done for sticking with it Darnell, I'm pants at scoring too. I do like your first card though - it's masculine and rustic! Now, onto your argyle story, you had me in stitches, in fact if I'd been knitting at the time, I would have dropped a few. Haven't heard of many scotsmen called Oswald though, which makes me think you've been spinning us a yarn ...!! xx

Full marks for effort and endurance that's for sure.

Loving the look of the first one .. .. it looks like tiles.

Hope you are having a good Sunday.

Once again, fabulous story and your cards, well I would give you an A for your incredible effort. I just purchased the new scor tool from stampin up and it works like a dream!

Sorry your scoring and stamping gave you such fits. If it's any consolation, scoring gives me fits too and I've never dared try to stamp within the scored lines. I think I'd probably pass out from holding my breath. You definitely have the right idea and I love what you came up with. Your story about the origin of Argyle is perfect!

Time was you couldn't find another person in the hemisphere called Karen - oh no - but now we have Karen's Nuts and now Karen from OLW ...... what's the world coming to? Isn't it typical that what you see in your head turns out rubbish on the page? Happens to all of us Darnell but you score a perfect 10 for your perseverence! Absolutely had me in stitches with your take on Argyll - fabulous as always....

So funny, even your frustration shows humor. Humor perseverance and talent, you have it all.

Beautiful argyle scored creation. All three cards are great and I can see the scoring on the first. We all have those days where our vision doesn't make it to paper, but it doesn't matter Yay! It's part of the creative process. Shirleyx

Beautiful argyle scored creation. All three cards are great and I can see the scoring on the first. We all have those days where our vision doesn't make it to paper, but it doesn't matter Yay! It's part of the creative process. Shirleyx

Wow you score big on perseverance I'd have given up after the second and great story by the way much better than the one I was taught at school- think Im going to enjoy following you ...:-D x

Och ;-) forgot to thank you for the compliment that you left on my blog I was delighted -the boys maybe not so much !!-they suggest that you wear your glasses more often if I look like their sister and (sucky in pants -translation is - underwear or instruments of torture to keep your tummy in and inhibit your ability to breathe or eat properly !!) x

Love your first card ~ you definitely get an "A" for effort. I definitely cannot stamp and score on the same card. There is also a very good reason that I rarely make one layer cards (because I have to cover up my mistakes!)

I really like that first card and think you are being a little harsh on yourself. As for your story of Argyle..I will think of that every time I put on my kilt socks! (I do Scottish dancing - in Wales!!)

Love the cards! You are very brave to attempt so many..I got too frustrated and scored simple straight lines~ruined too many cards. Love the story!HUGs Deanna

Well you certainly had fun with this Darnell! I really like the first card in those gorgeous colours and don't think it matters in the slightest that the scoring overlaps the stamping! My goodness, I wish you had been my history teacher... Vicky x

I don't think I would EVER attempt to score, then stamp! Too much room for error...oh, yeah...I see that you noticed that too! LOL! I do like the first card, and the bits of white look like they belong. As for the stampamajig...practice makes perfect...or so "they" say...I'm still waiting ....