Was your Monday memorable?  Maybe I should keep for myself one of the journals I make and put a lovely lapel on the front called "Memorables."  It might be nice to collect them, like marbles.  I love marbles and I hope never to lose mine, as you'll see later.

I survived yesterday's molar crowning by the DDS.  Turns out Novocaine makes me want to bake and there I was with half a case of pears which were all going yellow at once.  I've never cobbled, crumbled, crisped, or buckled pears before, but when I found this recipe for a Peach and Raspberry Crumble, I was intrigued, so I rolled up my elbows and ooh la la: 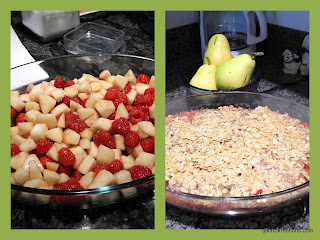 Double-Dog-Dangit, razberries are SO good in crispy, crumbly, buckles!  I had no idea.  I've mixed cranberries with apples, and blueberries with peaches, but never razberries with anything.  (BTW, I didn't have fresh citrus on hand per the recipe, so I just used the dry citrus peel spices in the leettle jars and lemon juice and it was super fine.)
~~~
I went to a great workshop last week so my card for you today is a thank you card I made after wards for the fab hostess, Sara.  I'm entering it in ColourQ challenge #155* and Retro Sketches challenge #30 by Wendy.
My card: 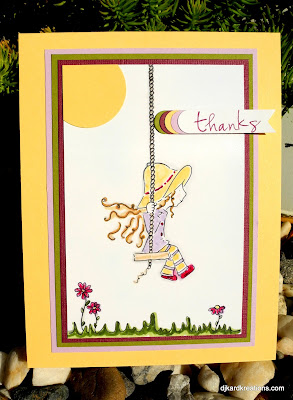 I love this sweet image for Sara.  Walking up to her front door for the first time, I noticed she had a child's swing hanging from a tree in her front yard.
~~~

Speaking of marbles, I have a childhood memorable of my friend's father who used to scare the crap out of me the few times I went over there to play.   Her name was Glennie June and her parents were very old.  Glennie June had a sister who was in high school for heaven's sake!  Her father had a booming voice and one time he walked into the kitchen where we were having Kool Aid and he yelled at his wife, "Emma Louise, you have lost ALL your marbles!"

Either way, I knew that for some reason it had scared her for a second, so after that I made sure I kept track of ALL my marbles.  I still have them.  Even my special bottle of metallic marbles. 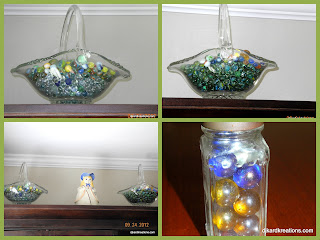 They are ready for playing, proudly on display as memorables on either side of my Lil Bo Peep pitcher, and proof that I still have my marbles, no matter what Mister says.  However, one of these days I'm sure the twins will sell me my own marbles out of one of their cardboard retail shops, which would be proof that I'm wrong and, in fact, I have lost my marbles!

Arteests, head's up!  We have another new crafter come to follow along with us!  Please welcome Sandy of Simply Sandy!  Thank you, Sandy!  She's just made a crack-up card featuring Captain Von Undervare!

Enjoy your day and make it memorable!   As always, thank you for stopping by to visit.  Special thanks to you if you take the time to join as a follower or leave a comment!

*So, turns out I should have posted first and then baked yesterday as I went and missed the deadline for the ColourQ challenge.  I'll link it later during the After Tour so it's all good.
at 9:40 AM

Great card - love the little detail of the colours on end of the sentiment strip! And it looks to me like you've found all the marbles I lost! lol! You know, now I think of it, I'm pretty sure my kids never really had marbles, so I guess they'll never lose them, right? lol!

Darnell I love your card, all the lovely matting and that image is so cute. Thank you so much for joining us this week at the colourQ!

Hi Darnell, your card is adorable and I love how you did that sentiment strip at the top - great idea. I don't think I am qualified to talk about marbles, seeing as I don't have any myself....sometimes it seems of either kind - (giggle). I follow Sandy already and love her work too, especially the latest piece. Well done on the cobblers/crumbles, they look yummy......Crafty hugs, Anne x

Love this card, Darnell. The image takes me back to hours spent riding on or pushing my siblings on a swing in the front yard. I love the matting behind the sentiment. Fabulous! Now you’ve got me hungry, looks yummy.
Hugs
Bernie

Lovely card Darnell -crumbles look yummy :) Im sure that i lost my marbles quite some time ago(well,so they tell me anyhoo !)but you can at least prove you still have yours ! and a very nice collection they are too :) x

What a sweet card with the little girl on the swing. I'm sure Sara will love it!

quite a charming little lass swinging in the sunshine. Cute card fun story:)

Aw, sweet card. I also like how you've layered the sentiment. I'm really glad you've not only still got your marbles, but you also know where they are.

I'm glad you've kept your marbles through the years! Mine vanished many years ago and I don't know how I manage most days! LOL
Cute card, and yes please to a piece of that yummy crumble!!

I would have loved to let my boys keep the marbles they were gifted but after one ended up in our TV screen, that was the end of those! Such a sweet card, the sentiment treatment is great!

Sweet card, and I like all the colors you used to emphasize this little girl on the swing. Enjoyed your marble story. At least you know where your marbles are...not sure I have any left. Will have to check so can then prove to anyone who tells me I am missing some!!! LOL! Thanks for the lovely card and the amusing story. Had a nice little chuckle. Hugs
Oh yes, will check out your newest follower to be sure.

You just crack me up...I know I have said this before but I always look forward to your posts, they are so entertaining! Your cobbler, crumbler, buckle or what ever you want to call it looks so yummy and I can just imagine a nice hot cup of coffee to sip while enjoying your master piece.
Now on to your card, another master piece, that little girl is just so sweet and all of your layering, so stunning! Looking forward to your next adventure especially now that you are royalty!

This is so cute, love the summer feel of your card it just makes ya smile :) Glad you kept all your marbles safe. Sandy :)

Oh and thanks for the recipe looks yummy, have to wait for pear season now.. Sandy :)

What a cute card. So creative design. I have chance to work for a company as Plastic id cards online designing, and this card design inspire me so more. I appreciate this. Thanks for sharing.

I love that sweet girl in the swing and all that yellow! Delightful! I hope those marbles are high up where the twinks can't see.

I love this sweet card, and I am sure that Sara will too. I love the layering with the matting and the strips, and that little girl on the swing is so very sweet. If I could color, it would surely be on my wishlist! 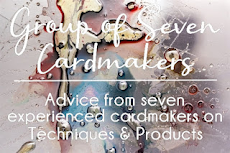