I'm sorry I'm so late today.  I woke up with one of my spark plugs disconnected or corruded, not sure which.  Ever have those days where even your hair feels limp?

What to do when you are fighting N. Wee?  For me, it would be participating in the CASology challenge.  This week the cute little cue card word is: 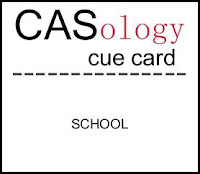 Ah, school.  Lemme think.  Fourteen miles down the road.  Uphill both ways.  There were snowdrifts both winter and summer.  The teacher, Ruby Nail, standing in the doorway with her arms behind her back.  We could just see the tip of the thin reed we knew was clutched in one bony hand.  Just in case.  My girlfriend told me that Winslow Lewis, 52 years later, still has a cowlick that won't lay down.  Poor guy just never got it.  I mean he "got it" a lot, but he never quite "got" it, you know?

BTW, I really did have a teacher named Ruby Nail.  She taught us English in middle school, which we used to call junior high.  She was a fine teacher.  It's not her fault I turned out this way.

If I could just turn your attention back to the card.  Here's the thing.  Turns out I don't have a single school stamp.  That's a recent development.  I had a few school stamps and then I received a lot more school stamps in a grab bag that I bought from my blogging friend, Susan.  Being out of the kid/school business, I gave the whole box of them to my friend, Donna, to give to her two crafty daughters, both of whom have children.

What I do still have, praise be, are delightful designer papers depicting schools, which I think are from DCWV.  So I used them to make this CAS card: 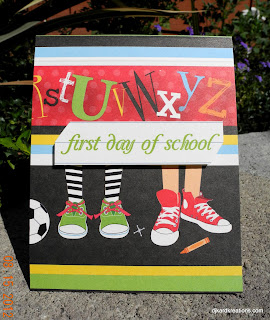 I'm pretty sure this card has, like, no white space, but it's CAS, and this paper is too doggone cute not to be made into a card!  The card is made from one sheet of the DP and the sentiment is cut from a different sheet and popped up on pop dots.  That's it.

Moreunder, even grandmas still love red tennis shoes, and I couldn't resist showing you mine next to my card: 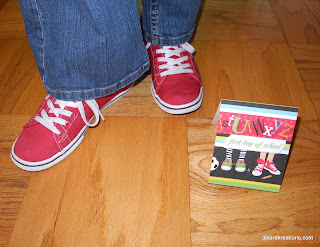 Is it me or does the photo perceptive seem off?  It's a normal size card, but next to my feet, the card looks like a twinchie.  And since the card is not a twinchie, then why do my feet look sixteen inches long, which they're NOT?

Oh well, enjoy!  I'm having six long-time coworker girlfriends over for lunch tomorrow, so I probably won't see you until Friday, what with being tipsy from the sun tea and all.

As always, thank you for stopping by to visit.  Special thanks to you if you take the time to join as a follower or leave a comment!

Email ThisBlogThis!Share to TwitterShare to FacebookShare to Pinterest
Labels: CASology

Fabulous paper and a great card. Great way to make a card when you don't have the stamps! Ann

Fab card. I agree the paper is adorable.

Love the shoes, will have to think about getting me some of those now. hmmm red or green though choices choices.. Cute card. Sandy :)

I just love your fun school card and your shoes are cool too, hugs x x

Those papers are brill and had to giggle when I read your blog,and your feet don't look big it's the card that looks small.... x

Love that fun card, and those red shoes!

14 miles both ways uphill through the snow, hey? LOL! Love your card, and I love the way it matches your groovy shoes, Darnell! I don't have any school stamps either, and I HAVE kids in school... got to rectify that omission in my supplies. ;-)

Hmm, 14 miles Darnell, is that how far you walked or is that how far it felt? Hee hee. What a fantastic and fun card, I love the picture with you sporting your red shoes! Thank you so much for joining is this week at CASology!

Love that fun school dp! I hope you have a great time with your friends! Thanks for playing along with CASology again this week!

Hahaha! Your description of school reminds me of my father's tales of his treks to school! :)

Love how you used what you had to make this adorable card! Your own red shoes make me want to go out and get some for myself...way too fun!!!
Thanks for joining us again at CASology! Your posts are always a joy to read! :)

Actually I was thinking how dainty your feet looked......maybe someone highjacked my perspective button! Love the card, that paper is beautiful and as you say, too nice not to be used.

My junior high English teacher was called Mrs Poth - I guess she must have had a first name too. She always made us recite:

Good, better, best
Never let it rest
Until your good is better
And your better best

All these years on I have never forgotten it...Crafty hugs, Anne x

very clever use of what school related supplies you had darnell! i always enjoy my visits to your blog... thanks so much for joining us each week at CASology!! :)

Great idea, that paper is perfect for a card! Love the red shoes too!

What delightful back to school paper! And I love your red shoes! I wore out my red shoes. I miss them. Have fun with your friends and sun tea!

Darnell, what a fantastic back to school card!! Love it!! That is the most amazing DP and I love that how you've used it. Great job and I think CAS just because you let the DP do the talking! Love your red runners (Canadian speak for sneakers) ... adorable! Have fun with your friends!

Loving your stylin' sneaks, Darnell, and your fabulous card! Thanks for playing along at CASology this week!

Love the card! That is some fun paper you used. That's cool that you still wear red sneakers that match your card. It's a photo perspective thing not that you have clown feet! I've taken some odd photos before where the perspective is all off. It truly fools the mind.

I work at a school and I'm always surprised to learn that not everyone divides their life into spring semester, fall semester, and summer. Huh? Who knew?

Love your card and those shoes. Can you tell us where you got them? I want a pair too. Really! :)

It's an adorable card Darnell and so are those wonderful shoes! I am a teacher and this card and your shoes remind me of a cute picture book called "Pete the Cat", your grandkidlets would love it!
Thank you for your kind comment on my blog and for all the support you have shown me.
Hugs,
Lesley

Love your shoes Big Feet! And the card is a cracker too! Lovely paper!

This is such a perfect card for school days, past and present. I loved your school story, 14 miles, don't know about that though :)

Your posts are just too funny! I love your card and your feet, just too cute and you can never go wrong with a pair of red sneakers! Your feet really don't look that big either, LOL. Your card is just too cute and that paper, just perfect. As always, adorable.

A spark plug disconnected? You are too funny! Love the red sneakers and the card.