I was able to take some time yesterday and make a card for this week's sketch over at Retrosketches.  This sketch was designed by the very talented Tracey McNeely of "In My Creative Opinion."  She does lovely work and I wanted to honor that by joining in the challenge.

I look at these sketches, as you probably do, and cock my head and point my ears, which helps me think better.  Yes, like a dog, trying to figure out if you're going to sit there and eat that whole sandwich in front of him, or actually share part of it.  I stop short of drooling, however.  I save that for looking at stamping magazines and any online stamping supply stores.

My heart was in the challenge, but my Original Creative Thought was low on batteries, so when that happens, I create literally.  Here is the design sketch: 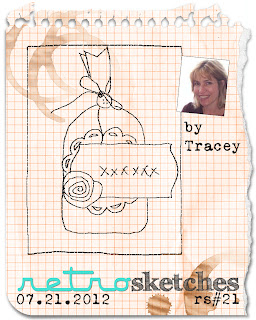 Here is what I saw. 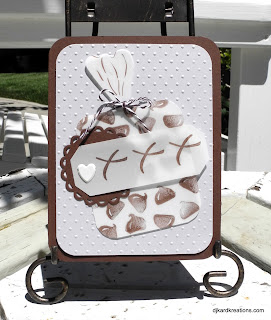 When Dan was little he used to say, "I did it on accident."  Not "by accident," the way adults say it.  He knew that things were done "on purpose," so it only made sense to him that the reverse of that would be "on accident."  I didn't have the heart to correct him because, frankly, it made sense to me, too, and I've said "on accident" ever since.

You remember how Mister built me clever collapsible structures out of PFC pipe so I could hang sheets over my hydrangea bushes on hot days?  Then a nice follower said she just puts small garden umbrellas over hers.  Oh, snap!  So that's what I do now. 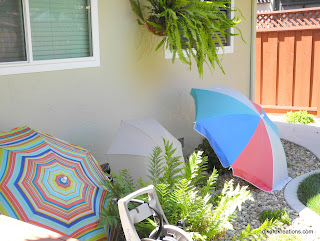 It's a lot easier and a lot more colorful than my old beige sheets, but we have a lot of hot days and I'm starting to ask myself if they're worth it, considering they have to spend almost the entire summer covered up, so they don't shrivel up and burn.  And they're located in the shadiest part of the yard, so moving them is not an option.  Sigh.

It looks like I'm hiding tiny naked sunbathers from the neighbor's prying eyes!  Which, okay, I find rather amusing.

Enjoy your day!   As always, thank you for stopping by to visit.   Special thanks to you if you take the time to join as a follower or leave a comment!

Email ThisBlogThis!Share to TwitterShare to FacebookShare to Pinterest
Labels: Retrosketches

My oldest says 'on accident' too :) Never occurred to me how he picked it up, but that totally makes sense!
Also, now I want chocolate.

Great minds?! I played retro sketches today too!! Love the bag of chocolates - I'm in the midst of the strict part of a nutrition/diet/cleanse - so it was fairly mean that you used chocolate ;) but I'm really hoping to be one of those tiny sunbathers!

Thanks for popping over to see me. It has meant that I have now popped by to see you and that gorgeous card! Soo pretty. I have just been to Victoria and seen how she has used the same sketch!
I hadn't realised Hydrangeas needed that much shade, or is it just we don't get too much sunshine over here?

Thanks for popping over to see me. It has meant that I have now popped by to see you and that gorgeous card! Soo pretty. I have just been to Victoria and seen how she has used the same sketch!
I hadn't realised Hydrangeas needed that much shade, or is it just we don't get too much sunshine over here?

Darnell this is fantastic! I love your embossing and that super cool tag. Your literal approach to the sketch is awesome.

Love the literal interpretation of the sketch, Darnell. I avoid sketches because ... well, just because really. (OK, they scare me).

Your hydrangeas are very pampered, I hope you get some fabulous blooms from them for all your efforts.

My ears are burning again... but this time it's Hettie talking about me behind my back!! I would eat a chocolate chip stamp too. In fact forget the 'chip' bit. Give me a full size chocolate stamp....mmmm.... daydreaming about chocolate now.....
(Lovely card by the way!)

Hi Darnell, your card is absolutely gorgeous, loving all those chocolate chips......yum. What a fabulous yard you have with all those umbrellas, I would love to be a fly on the wall of your neighbours to know exactly what they think you are up to.....you could put the odd garden gnome under one or two umbrellas......... Crafty hugs, Anne x

Love your chocolate chip stamp and the way your mind works! Great card!

I love your yummy card! On accident, what a fab way of saying it and love the brollies xx

Great literal interpretation. I was looking for the coffee stains - ha! I love the chocolate kisses and the x kisses on this very fun card.

Your hydrangea are parasol girls!

What a sweet card. And, I mean that literally--I adore chocolate, and would love to have a stamp like yours. Your card reminds me of love--hugs and kisses, and I'm sure will be loved by the lucky recipient.

Fabbydosey card Darnell - love your literal take on the sketch.........my batteries must be the same type as yours coz they're always running low - must get some rechargeable ones! Totally agree with Dan's reasoning for "on accident" - makes so much sense.....he must have inherited your literal gene. Like Samantha I didn't know you had to shade your hydrangeas.......they tend to grow like weeds over here; but then our weather is a tad different in the UK......although we were sweltering with 30° yesterday (melting choccy time....mmmmmmm!). Had to giggle about your tiny naked sunbathers - that's going to stay in my mind all day!

A brilliant card Darnell, the colours are so Vintage - perfect.

That's a pretty cool bag of chocolate kisses, Darnell! I gather the bag is empty. LOL, they're meant to be eaten. Right?

Darnell this is too cute! I love the embossing in the background! Thanks so much for playing along at RetroSketches this week!

Another delicious looking card ~ your posts are making me hungry! What a fun take on the retro sketch!