No card today.  You can click off, no worries.

I'm undergoing a recreation of my system for storing dies, so the Playhouse is no place for making cards until that project is finished.  More on that on tomorrow's WOYWW.

BTW, interesting word recreation.  It can be read as REcreation, a new creation or as RECreation, as in "on holiday" or otherwise having fun.  Perhaps it should be pronounced the same way for both meanings, just REcreation.  After all, when we are taking a break from work, on holiday, or at play, are we not REcreating our spirits and refueling our tanks so we are more creative and productive when we return to our labors?

A lot of "re" words are confusing to me, why the "re" is there, I mean.  Take relax, for instance.

Forty years doing crossword puzzles and reading dictionaries and the Saurus can make you a bit of a nutball.


I was nurtured by nature yesterday working for hours in the garden.  After telling you I would take "before" and "after" pictures, I took only one "before" picture, then simply got to work getting rid of all the bug-infested germaniums and repotting new plants.   I found out from Mister that he never did like the germaniums.  He could have said something before now.

I'm not going to say a word about the weather in tribute to my UKelele friends who have been long-suffering with no summer sun, and my Mid and Eastern USA family and friends who are wilting from too much sun. 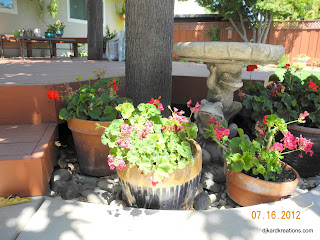 The only "before" of the poorly germaniums. 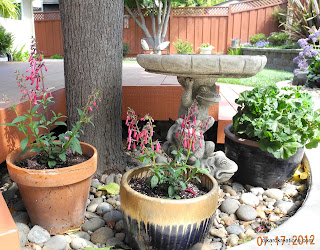 The "after."  I've got my fingers crossed that these Cape Fuchsia plants will make it.  It's so hard to find flowering shade-loving plants.  This particular Cape Fuchsia is 'Funfare Wine.'  I'll let you know how it turns out, the wine I mean.  I kept that one germanium on the right of the froggie birdbath because it doesn't seem too infested.

I'll do collage pictures of the other flowers, maybe save a little Blogger memory. 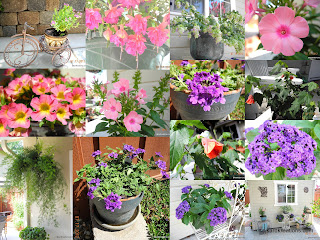 I discovered one of my dahlia in bloom: 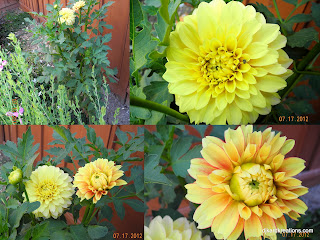 And here are Miss Alainie: 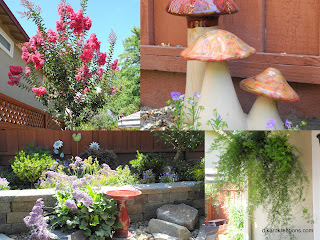 I'm so thrilled to welcome a new follower today!  Please visit All Occasions Cards, Papers and More and say hello to Irene!  Thank you, Irene!

The other day at the post office I was standing in line in front of two young mothers with toddlers.  They were quite openly commiserating with each other about the problems in their marital sex lives.  Their grandmothers would have been mortified.  In their day, one didn't even ask another about their dinner plans (and certainly not in public!) as that would have been considered too personal.  I wasn't mortified, but I was mesmerized.  I was at the front of the line and, for once in my life, hoping the guy at the window would take his time.

I had to quickly take my package and leave the building when the other young woman responded,

Enjoy!   As always, thank you for stopping by to visit.   Special thanks to you if you take the time to join as a follower or leave a comment!

Email ThisBlogThis!Share to TwitterShare to FacebookShare to Pinterest
Labels: Photos, Rants or Ramblings

Oh Darnell, that is just too funny! Here I am at 15 minutes past midnight unable to sleep and you make me laugh histerically - what will Mr think..........love your fushias btw. Off to wipe my tears........A x

Ooh yes, perhaps Mother nature is being a bitch this year!!! Good call! What bugs were in your plants? I though geraniums were pretty tough! Lol to the women in PO. A few years ago my hubby was on business and having a meal by himself, in the next booth were two couples having a night out. He was a bit shocked to hear the women openly talk about the latest vibrators on the market, so he listened to see if the men were also joining in! Turns out they were talking about golf, which could explain why the women were talking about what they were talking about!!!!

PS. WOYWW is already up if you fancy linking early.

I'm with Redanne here - well, not literally, but we're both up late, both in the UK and both crying with laughter! Soooo funny.

Brilliant photos too - thanks for the late night giggles :)

Darnell, your stories are too funny! Thanks for sharing your garden pics and I can't wait to see your RE-organization.

Too funny! Your plants and flowers are beautiful. I just try to keep mine alive. I'm looking forward to seeing the new die organization!

Thanks for the laugh, love your trip to the PO. Hope your flowers do well, can't wait to see the changes in your craft room!

And I always thought men's brains were located between their....
Love all your garden pics.

Your trip to the PO certainly won't be forgotten in a hurry!!! Hilarious!!!!

Your garden's looking beautiful by the way!

Flowers are looking lovely and like the little toadstools.

Darnell....LOL, LOL, FOTFL...I love Dahlias! I wish I would find one in my garden. (I think I'll start going to the PO instead of sending DH.)

I've been just reading through the last bunch of posts and holy Hannah, I need to not miss any of them!
Your nose? I would never have been able to get out of there without bwahahaing all over the place. My god.