Ba-da-dum, it's Friday!  And, before I forget, Happy Mother's Day to everyone on Sunday!

I made a card today for the CAS-ual Fridays weekly challenge.

Ad:  AnnaBelle Stamps is an Australian based online store that has an exclusive range of photopolymer stamps and embellishments as well as other crafting supplies. We ship world wide and have just introduced FREE shipping on all orders over $75.00 so be sure to check the store for full details! Our incredible DT showcases our stamps and embellishments on our weekly challenges and twice monthly hops on our blog, where there is always a chance to win a prize! Come for a visit today :) This week's winner will win a mini shopping spree!

So how cool is that?  Click over and make a project with birds!  My card features one of my favorite stamps to watercolor: 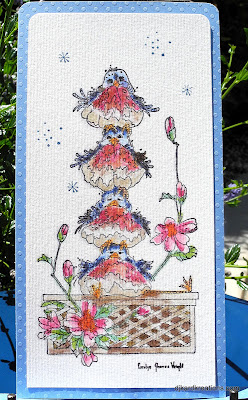 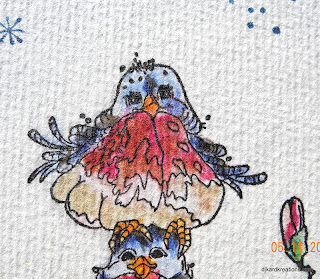 What a fabulastic artist ~ just look at the expressions on those birds!  I send this to people who have been promoted.  They say getting to the top of the heap isn't all it's cracked up to be, but boy, you couldn't convince that bottom bird of that!!  Nor the top bird, for that matter!  It makes me giggle whilst I'm watercoloring.
You guys have honored me so much, I can't tell you!  Almost daily I am welcoming new followers and it's such a privilege!  Today we celebrate Julie Day of J.Day Designs and Dotty from Dotty A Designs!
Please enjoy ~ and, as always, thank you for stopping by to visit.   Special thanks to you if you take the time to join as a follower or leave a comment!


I mentioned I was going to tell you the story of the sisters.  Just to warn you, it is not really funny, as is usually my style, but it is heartwarming.  It did occur to me that I have to edit this somewhat and not show you pictures of the whole family, just in case someone is shy about it.

Information is sketchy and comes from an aunt and uncle.  For her own reasons, our mother, who has also passed away, refused to tell her story, even into her 80s.  I think Para Noia came often to her and it was sadly misplaced.  All anyone wants to know is their story, good or bad.  No judging.  Your parents and your grandparents, that's all part of your story, and information should not knowingly be withheld once everyone is all growed up.  I feel.

Once Dad was gone for good around 1959, Mom spun out, acted out, and passed out more and more. She turned her rage on me, again for her own reasons, of which I'm ignorant.  It's not an unusual tale of abuse (sadly) and this is not about that, so we'll skip ahead.  After a couple of years, authorities placed me in a foster home when I was 12 years old.  I was the only one abused and the only one removed.  It was the last time I saw my brothers and sisters, except for one sister, for the next 40 years.  Although I tried on one occasion, a reconciliation with my mother was not something she was interested in and I never saw nor spoke with her again.  I consider the loss to be hers, never having me, my husband, our child, or our grandchildren in her life.

Foster homes are wonderful and save the lives of many children.  Mine was not so wonderful. My foster mother was also abusive, mentally more than physically, but I got through it.  My life, thereafter, has been one blessing after another (including my husband's family and countless friends) and has more than made up for the gruesome childhood years.  I'm so happy to be here.

When I was 19, sister Doris ("Dood") found me.  That's a goose-pimply story in itself, but this isn't supposed to be a book.  We were in each other's small weddings in 1970 and 1971 and we corresponded by letter once or twice a year after that.  Life went on and things happen in life the way things do and one day a couple of my siblings let Dood know they would like to meet me.  I was at a place where I wanted to meet them, too.

And so it happened on a beautiful day, June 10, 2001, all seven of us brothers and sisters meet at a city park in a small town in the Midwest.  We came from as far away as the Philippines!  I had t-shirts made for the momentous event.  "D-Day" they said, because all seven of our names start with the letter "D."  We were also able to include our mother's sister and her husband, and our mother's brother and his wife, all of whom were estranged from our mother.  We had some happy childhood memories of times spent with those aunts and uncles and so it was a joy to include them as well.  Also happily present were many of our children.

Within a year, both our aunt and her husband, and our uncle, were dead.

I told you it was an Oprah story.

The three youngest have not been much interested in annual reunions after that first one, but the four oldest girls have faithfully gotten together every year since, for 11 years!  We've met in California, Oregon, Iowa, Missouri, New Mexico, and Florida.  Needless to say, we laugh often and we laugh a lot.  As we've gotten older, Depends comes along.  Last year, I had to resort to stuffing a tea towel in my pants because Depends didn't hold up to that kind of laughter!

Here is a picture of the four of us in early days: 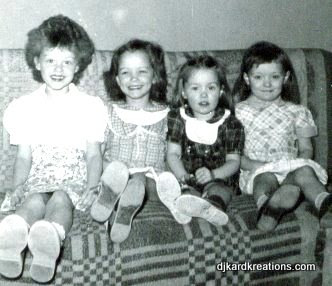 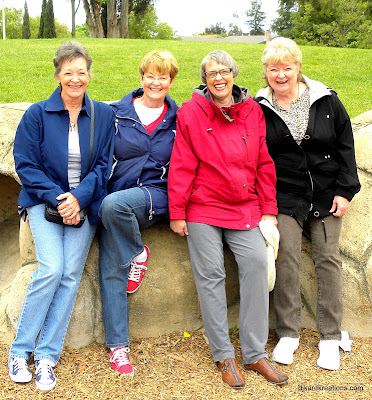 You see why I would have been disappointed if I'd had to cancel my trip next week!

In another episode, I'll show you the cookbook I wrote of all of the sisters' favorite recipes.

We are off early in the morning to see the twins' Little League game.  It's the first one we've been to and I know it will make our eyes well up as we remember going to their father's games ~ that seems like only yesterday!  Then we are bringing the boys back home with us for a sleep-over, so I won't be on tomorrow  and probably not on Sunday.

I hope you have a great weekend and, again, Happy Mother's Day!

Love your chubby little birds - they're perfect for promotion cards!

Have a great weekend!

Love your card, Darnell. Your watercoloring is fantastic!

Thank you for sharing a glimpse of your life with us. {{{Hugs to you}}}

So glad that you play along with us at CAS-ual Fridays!

The birds are absolutely gorgeous, love them lots. I know it will not really help much but your relationship with your Mother was much the same as mine so I understand how you feel. Lovely pic of you and your sisters. It must warm your heart. Crafty hugs, Anne x

Such an incredible story, just really touched my heart...thank you so much for sharing it with all of us. Now on to your card, you just always amaze me, this card is so darn cute!!! Those birds and your water coloring, awesome.

I'm wiping tears right now. You are an amazing woman, Darnell! I love that card too, those birds tell a story.

Those birds are so so cute! We saw a gaggle of goslings a little while ago and these fuzzy little guys reminded me of them. They are so you! Such a fun card. You should write a book. You write so well and have so much to draw from. I feel sad for the little girl of long ago and so happy that you are fairly normal now and such a blessing to so many. Happy Mother's Day Darnell.

great colors for your card. bravo!

Happy Mother's Day to you and thank you so much for sharing your family with us. Your perspective is truly fabulous and how wonderful that you have time with your sisters each and every year.

PS I love your sweet little birds card. Thanks so much for playing with us at CAS-ual Fridays.

Your stack of watercoloured birds are such fun Darnell! And a big hug to you from a fellow survivor. Vicky x

Oh how wonderful to have so many siblings, and so many sisters! If only I had just one sister!! (I would get her into crafting - so more money to buy supplies!)

By the way, it was only today that I found out my mom showed me your craft room a few weeks ago. She was so amazed at the little shed/house in your backyard and she's trying to get the whole family to reorganize our game room to a craft room :D

Such a beautiful card, the watercoloured birds are fantastic Darnell. Enjoyed the photos of you are your sisters.

I am so glad you are now with some of your sisters again. I am sorry about some of the things you had to go through. I am very happy you are so blessed now. I am 1 of 9 .
I have to go back and look at the card…………Very pretty love the stacked birds.
I enjoyed seeing how happy you all look now! Life is good!

Love your card, Darnell! The images are so cute! I am so happy that you and your Sisters are able to spend more time together now. Growing up apart was not the easy thing to do, but you all came along and can now finally be together! It truly is a blessing after all. Enjoy the precious time with your sis! HUGS!

Love that stack of birdies, Darnell! Thank you for sharing your story. You're an inspiration! Ann

Really love that stamp! Great coloring. Thanx for stopping by!

I read this back when you first posted this...but you reposted the link today, and I read it again. I remember sharing with you back then...how I could relate to so much of this...But you are so right we are both so fortunate that after having such difficult childhoods. We both have so many blessings with the wonderful families that we have now.

Darnell
I have been stamping and making cards since 2002. I've been married 50 years to Kevin, known herein as "The Mister." Our son Daniel and his wife Rachel have twin sons Henry and Adam. Card-making and blogging are wonderful hobbies which have brought me noodles of friends! Oh, and I have an imaginary hamster named Hammy who keeps me in line. Thank you for visiting, joining, and commenting! It will be my pleasure to return the flavor!!